Pomona College history professor Samuel Yamashita‘s lecture on what he calls the “Japanese Turn” in fine dining drew a full house to University of Hawai‘i at Mānoa Hamilton Library last week (April 17). Audience members included well-known chef Roy Yamaguchi, who was part of this “turn” during his years in Los Angeles when he pioneered Euro-Asian cuisine. As a tie-in, advance copies and flyers were displayed of Professor Yamashita’s 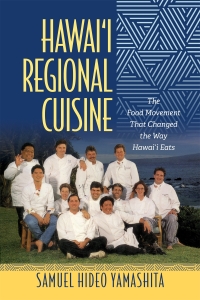 which is on display until May 27 in Hamilton Library’s First Floor Elevator Gallery.

Read the wonderfully comprehensive information and view more photos on the event here. Yamashita will be returning to Honolulu in mid-July to launch Hawai‘i Regional Cuisine; meanwhile, order the book here. If you would like to be notified of the July events,

California roll, Chinese take-out, American-made kimchi, dogmeat, monosodium glutamate, SPAM—all are examples of what Robert Ji-Song Ku calls “dubious” foods. Strongly associated with Asian and Asian American gastronomy, they are commonly understood as ersatz, depraved, or simply bad. In Dubious Gastronomy, Ku contends that these foods are viewed similarly to Asians in the United States, in that the Asian presence, be it culinary or corporeal, is often considered watered-down, counterfeit, or debased manifestations of the “real thing.” The American expression of Asianness is defined as doubly inauthentic—as insufficiently Asian and unreliably American when measured against a largely ideological if not entirely political standard of authentic Asia and America.

In critically considering the impure and hybridized with serious and often whimsical intent, he argues that while the notion of cultural authenticity is troubled, troubling, and troublesome, the apocryphal is not necessarily a bad thing: The dubious can be and is often quite delicious.