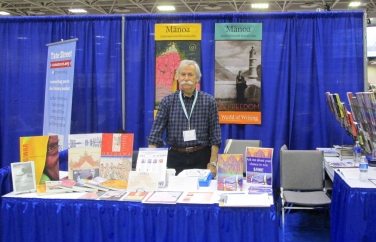 At the 50th annual Association of Writers & Writing Programs (AWP) Conference & Book Fair, held this week in Washington, DC, stop by booth 791 and say aloha to the editors of MĀNOA: A Pacific Journal of International Writing as you browse University of Hawai‘i Press publications. Among the UH Press books and journals on display will be MĀNOA‘s latest issues: Curve of the Hook,  The Color of Dawn, and Story Is a Vagabond; information on the University of Hawai‘i at Mānoa English Department creative writing program will be distributed as well.

Other featured titles include:

The Charm Buyers by Lillian Howan

For a Song by Rodney Morales

The Healers by Kimo Armitage

Five Faces of Japanese Feminism: Crimson and Other Works by Ineko Sata, translated by Samuel Perry

The Blind Writer: Stories and a Novella by Sameer Pandya

The Confessions of a Number One Son: The Great Chinese American Novel by Frank Chin, edited by Calvin McMillin

The book fair opens on the morning of Thursday, February 9 and closes the afternoon of Saturday, February 11. 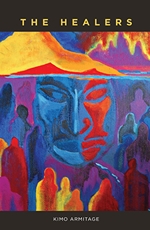