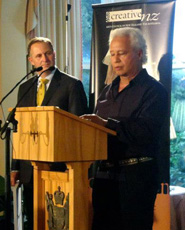 Yesterday Albert Wendt (shown with New Zealand Prime Minister John Key) was presented with this year’s Prime Minister’s Award for Literary Achievement for Fiction in Wellington. The Samoan-born writer’s previous awards include the Wattie Book of the Year, the Montana Book Award, and two Commonwealth Book Prizes. He is acknowledged as one of the Pacific’s major novelists and poets and an important influence in the development of indigenous writing around the world.

Wendt is the author or editor of numerous books published by University of Hawai‘i Press, including Leaves of the Banyan Tree, Pouliuli, The Adventures of Vela, Sons for the Return Home, Black Rainbow, and Ola. His most recent book, Ancestry, is published by Huia Publishers and will be distributed in the U.S. and Canada by UH Press later this year.