In Dilemmas of Adulthood, Nancy Rosenberger investigates the nature of long-term resistance in a longitudinal study of more than fifty Japanese women over two decades. Between 25 and 35 years of age when first interviewed in 1993, the women represent a generation straddling the stable roles of post-war modernity and the risky but exciting possibilities of late modernity.

Rosenberger’s analysis establishes long-term resistance as a vital type of social change in late modernity where the sway of media, global ideas, and friends vies strongly with the influence of family, school, and work. Women are at the nexus of these contradictions, dissatisfied with post-war normative roles in family, work, and leisure and yet—in Japan as elsewhere—committed to a search for self that shifts uneasily between self-actualization and selfishness. The women’s rich narratives and conversations recount their ambivalent defiance of social norms and attempts to live diverse lives as acceptable adults. Dilemmas of Adulthood is essential for anyone wishing to understand how Japanese women have maneuvered their lives in the economic decline and pushed for individuation in the 1990s and 2000s.

Sponsored by the UHM Women’s Studies Colloquium Series and the Center for Southeast Asian Studies, the free event will take place in Saunders Hall 244. University of Hawai‘i Bookstore will have books available for purchase. The public is invited to the talk, followed by a book signing and refreshments.

Each year the Association of American University Presses (AAUP) compiles its University Press Books for Public and Secondary Schools Libraries, a bibliography of titles submitted by member presses as a tool for collection development. The books are rated by committees of public and secondary-school librarians from two divisions of the American Library Association. 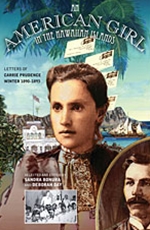 In this year’s collection, An American Girl in the Hawaiian Islands: Letters of Carrie Prudence Winter, 1890–1893, edited by Sandra Bonura and Deborah Day, received a top “Outstanding” rating. As defined by the selection process, Outstanding titles have “exceptional editorial content and subject matter. They are essential additions to most library collections.”

The reviewer’s comments below can be viewed at the end of the listing (sorted by Dewey Decimal class) of the 2013 Outstanding Titles.

The use of Carrie Prudence Winter’s original letters is what allows this book to become a rare primary source on topics such as: women missionaries, the last days of Hawaii’s monarchy, and a long-distance 19th century courtship. Ms. Winter’s use of language paints a compelling picture, engaging a reader’s imagination while they learn of a world few knew so intimately.”—Stacey Hayman (CODES/RUSA)

Besides being available online, the print bibliography was distributed last month at the American Library Association annual conference in Chicago. General information on the bibliography and rating system, as well as how to order copies, can be found here.

An American Girl in the Hawaiian Islands also was one of three finalists in the biography category of this year’s San Diego Book Awards.

San Diego resident Leilani Holmes, author of Ancestry of Experience: A Journey Into Hawaiian Ways of Knowing, will visit Honolulu this month and appear at two public events.

On Saturday, May 11, 4:00 to 5:30 p.m., at Native Books/Nā Mea Hawai‘i, she will speak on her search to reclaim her origins, as well as discoveries of wider interest on Hawaiian identity and ancestry. Light refreshments will be provided at the free presentation. (She will start with a bit of hula, so come early!) 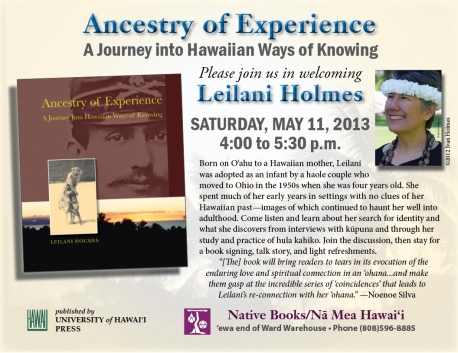 Leilani will also participate as one of the almost 200 presenters at the Hawai‘i Book & Music Festival, May 18-19, at the Frank F. Fasi Civic Grounds next to Honolulu Hale. On Saturday, May 18, she has two timeslots: At 12 noon, she will be a panelist at the Hawai‘i Council for the Humanities tent pavilion; at 4:00 p.m., she will be the solo presenter at the Alana Hawaiian Culture pavilion.

The term “revival” has been used to describe the resurgent vitality of Buddhism in Taiwan. Particularly impressive is the quality and size of the nun’s order: Taiwanese nuns today are highly educated and greatly outnumber monks. Both characteristics are unprecedented in the history of Chinese Buddhism and are evident in the Incense Light community (Xiangguang). Passing the Light: The Incense Light Community and Buddhist Nuns in Contemporary Taiwan, by Chün-Fang Yü, is the first in-depth case study of the community, which was founded in 1974 and remains a small but influential order of highly educated nuns who dedicate themselves to teaching Buddhism to lay adults.

Women’s Movements and the Filipina: 1986–2008, by Mina Roces, is about a fundamental aspect of the feminist project in the Philippines: rethinking the Filipino woman. It focuses on how contemporary women’s organizations have represented and refashioned the Filipina in their campaigns to improve women’s status by locating her in history, society and politics; imagining her past, present and future; representing her in advocacy; and identifying strategies to transform her. The drive to alter the situation of women included a political aspect (lobbying and changing legislation) and a cultural one (modifying social attitudes and women’s own assessments of themselves). In this work the author examines the cultural side of the feminist agenda: how activists have critiqued Filipino womanhood and engaged in fashioning an alternative woman.