Join Dr. Amy Sueyoshi as she discusses the subject of Queer Compulsions: Race, Nation, and Sexualities in the Affairs of Yone Noguchi on Sunday, October 19, 1:00 p.m., at the Japanese American Museum of San Jose. In her work she explores the complex interaction between lived sexualities and socio-legal mores, tracing how one man negotiated affection across cultural, linguistic, and moral divides to find fulfillment in unconventional yet acceptable ways.

Read more about the event on the JAMsj site.

Out of the Dust: New and Selected Poems
written by Janice Mirikitani

Though constructed from a depth of experiences with struggle, these poems erupt in celebration of marriage, daughters, and the discovery of self through diversity. Drawing from her own background as a Sansei (third generation) Japanese American, Mirikitani reflects on the many ways we connect through the dust and our ability to rise and renew ourselves from this place. Learn more here.

Transgender identities and other forms of gender and sexuality that transcend the normative pose important questions about society, culture, politics, and history. They force us to question, for example, the forces that divide humanity into two gender categories and render them necessary, inevitable, and natural. The transgender also exposes a host of dynamics that, at first glance, have little to do with gender or sex, such as processes of power and domination; the complex relationship among agency, subjectivity, and structure; and the mutual constitution of the global and the local.

Particularly intriguing is the fact that gender and sexual diversity appear to be more prevalent in some regions of the world than in others. Gender on the Edge is an exploration of the ways in which non-normative gendering and sexuality in one such region, the Pacific Islands, are implicated in a wide range of socio-cultural dynamics that are at once local and global, historical, and contemporary. The authors recognize that different social configurations, cultural contexts, and historical trajectories generate diverse ways of being transgender across the societies of the region, but they also acknowledge that these differences are overlaid with commonalities and predictabilities.

Not for sale in East and Southeast Asia, Australia, and New Zealand 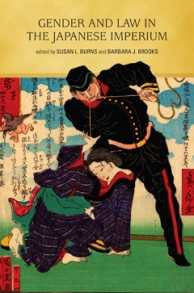 Arguing against the popular stereotype of Japan as a non-litigious society, an international group of contributors from Japan, Taiwan, Germany, and the U.S. explores how in Japan and its colonies, as elsewhere in the modern world, law became a fundamental means of creating and regulating gendered subjects and social norms in the period from the 1870s to the 1950s. In Gender and Law in the Japanese Imperium, the authors suggest that legal discourse was subject to negotiation, interpretation, and contestation at every level of their formulation and deployment.

With this as a shared starting point, they explore key issues such reproductive and human rights, sexuality, prostitution, gender and criminality, and the formation of the modern conceptions of family and conjugality, and use these issues to complicate our understanding of the impact of civil, criminal, and administrative laws upon the lives of both Japanese citizens and colonial subjects. The result is a powerful rethinking of not only gender and law, but also the relationships between the state and civil society, the metropole and the colonies, and Japan and the West.

In Dilemmas of Adulthood, Nancy Rosenberger investigates the nature of long-term resistance in a longitudinal study of more than fifty Japanese women over two decades. Between 25 and 35 years of age when first interviewed in 1993, the women represent a generation straddling the stable roles of post-war modernity and the risky but exciting possibilities of late modernity.

Rosenberger’s analysis establishes long-term resistance as a vital type of social change in late modernity where the sway of media, global ideas, and friends vies strongly with the influence of family, school, and work. Women are at the nexus of these contradictions, dissatisfied with post-war normative roles in family, work, and leisure and yet—in Japan as elsewhere—committed to a search for self that shifts uneasily between self-actualization and selfishness. The women’s rich narratives and conversations recount their ambivalent defiance of social norms and attempts to live diverse lives as acceptable adults. Dilemmas of Adulthood is essential for anyone wishing to understand how Japanese women have maneuvered their lives in the economic decline and pushed for individuation in the 1990s and 2000s.

Sponsored by the UHM Women’s Studies Colloquium Series and the Center for Southeast Asian Studies, the free event will take place in Saunders Hall 244. University of Hawai‘i Bookstore will have books available for purchase. The public is invited to the talk, followed by a book signing and refreshments.